Classical Greek city rising out from the sand.

The Ancient Greek Classical city of Selinous, modern day Selinunte is on the south-west coast of Sicily in the heart of the Mediterranean.

Immigrants from the Greek settlement of Megara Hyblaea (Sicily East Coast) founded Selinous in the 7th century BCE. They named it after the wild celery that once was abundant there. Selinous prosperity and prestige grew in the next few centuries following its foundation and become exceedingly affluent and glorious from exporting wine, cereals, olive oil and ceramic artefacts.

Admired and envied throughout the Mediterranean, Selinous was a target for invaders. On a fateful day in 409BCE, 100,000 soldiers of the Carthaginian army attacked and almost destroyed the city. Of the 25,000 inhabitants, 16,000 were butchered, and another 7000 were enslaved. Any that survived escaped to the ancient Greek city of Akragas (Agrigento).

Finally abandoned around 250BCE, the forces of nature then buried Selinous as windblown sand and earth covered the city.

Modern excavations have been revealing, and it is being regarded as the most complete preservation of an Ancient Greek classical city.

Boosting several Doric Greek temples all identified by a letter, Selinunte archaeological park is the largest in Europe and one of its most beautifully located.

Two highlights being Temple E, which is one of the most complete Greek temples in the world and the massive ruins of unfinished 6th BCE Temple G, which would have been the fourth largest temple ever built in the ancient Greek world.

Nearby Ancient Selinous is Cave di Cusa which was the ancient quarry used to provide masonry for the Temples. The quarry includes many abandoned colossal cylindrical drum blocks still waiting for two thousand years to be transported to the ancient city. 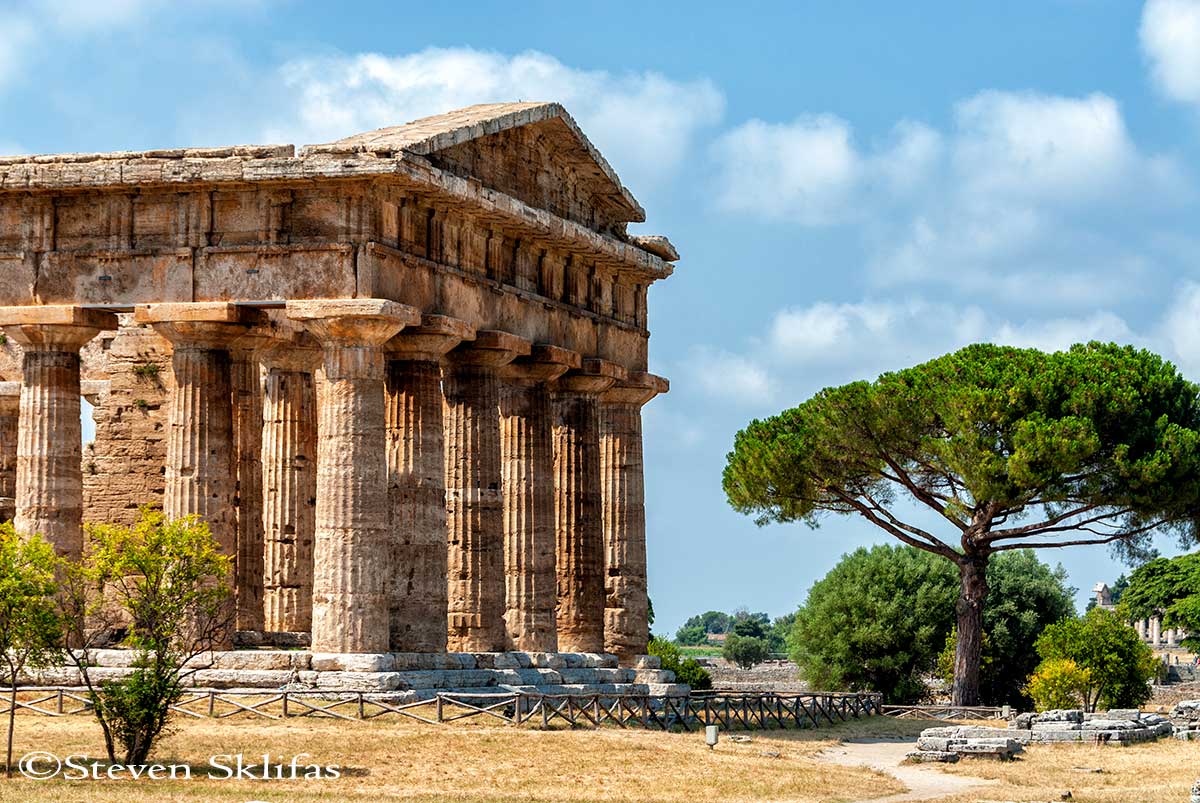 Originally named Poseidonia, in honour of the Greek Sea God Poseidon, Paestum was founded in the 7th century BC by Ancient Greek colonists from the city of Sybaris which was situated in the current Gulf of Taranto in southern Italy.

Its location was chosen for its fresh water supply and rich fertile plain, ideal for agriculture. Its site also allowed for excellent land access through the Lucanian hills to the seaport. The city became wealthy enough to mint its own coins and became an important centre of Magna Graecia–Greek colonisation in Italy.

After a few hundred years, the city was occupied by the indigenous Lucanians and then by the Romans in the third century BC. Paestum succumbed to malaria after the fall of Rome and was eventually abandoned in the late 9th century.

For nearly 1000 years, Paestum and its grand majestic temples were overgrown by tangled vegetation and partially submerged in swampland until the mid-18th century, when the ancient site was rediscovered by road crews.

The three ancient Greek Doric temples of Paestum (Hera, Hera II and Athena) are ranked amongst the best preserved Greek Temples in the world.

The museum house the extraordinary cycle of mural paintings from the 5th century BC Tomb of Diver, which are the only type of its kind in the world and are the only example of Greek wall painting with figured scenes from the Archaic, or Classical periods to survive in their entirety.